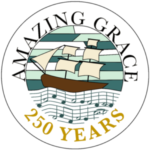 In 2023,  Olney will be at the centre of celebrations to mark the 250th anniversary of one of the world’s most beloved hymns, ‘Amazing Grace’. John Newton, the former-slave-trader-turned-Anglican-priest, composed it in the weeks leading up to his New Year’s Day service at St Peter and St Paul Church in the town, on 1 st January 1773.

Since then the hymn has been featured  in various different musical styles, but without doubt has gone on to inspire countless people. In the U.S, it has even become known as the nation’s “spiritual anthem.”

The anniversary will be marked with a number of events throughout 2023. Back in 2020, we had the honour of launching online awareness of the event. It is hoped this will inspire people in and around Olney to think about organising their own events.

Cowper and Newton museum trustee, Amanda Molcher, says “’Amazing Grace’ is a hymn that means so many things to so many different people, and so we didn’t want to mark its 250th anniversary with just one big official event,” adding “In the coming months, we’ll be looking to fill the calendar with more and more events to celebrate this incredibly important song, and we’d love to hear from local groups and individuals who would like to join in by organising their own events and celebrations.”

Events, from an Amazing Grace Community Quilt Project to establishment of a new community orchard, while the Cowper and Newton Museum has begun work on a ‘Sharing Heritage’ project, that will tell the stories of the people and places of Olney through new information boards and heritage trails.

If you have an idea for Amazing Grace 250, or would like to offer support for the anniversary preparations, please email the event team at olneyag250@yahoo.com – or alternatively register on this site and add your event details yourself.