A Brief History of Olney 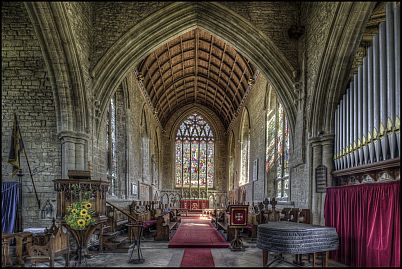 People have lived in Olney from the days of the Roman Empire. In Saxon times, Olney was mentioned in a Charter of 979 AD as Ollanege (which is thought to mean ‘Ola’s Island’). Olney belonged to a descendant of the King of Mercia before becoming part of the Viking lands.

Following the Conquest in 1066, Olney, or Olnei, was mentioned in the Domesday Book. A loyal supporter of King William The Conqueror was granted lands, including Olney. Upon the King’s death, he backed the wrong man to succeed the King and was stripped of the land.

The Battle of Olney in 1643 is a famous chapter in the story of Olney’s history. During the Civil War between the Royalists and Parliamentarians, the latter held the area around Olney; Prince Rupert held Northampton for the King. Prince Rupert and his troops suprised the Olney forces and the Parliamentarians retreated to the bridge. Theirs was a defiant stand and they might have won decisively, but for a rumour that Cromwell’s reinforcements were seen coming from Newport Pagnell. The Royalists retreated and the battle was over.

The remains of some of those who died in battle were discovered in the last century and were re-buried in the Olney churchyard. The Battle of Olney Bridge is commemorated on a recently installed plaque in Emberton Park. 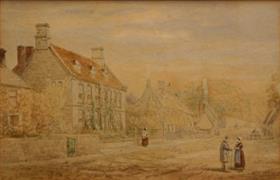 During the 18th Century, Olney was a staging post for travellers. Horse-drawn coaches passed through taking people between Kettering and the Newport Pagnell Turnpike. It is said that by 1754 there were 27 inns in the town. This was also the home of poet William Cowper and writer, curate John Newton who wrote the ‘Olney Hymns’ together. See the entry on the Cowper and Newton Museum for more information. During the 19th Century, Olney was a poor community hit by outbreaks of cholera and smallpox. The census shows people employed in farming, shoemaking andlace industries or in shops or businesses like butchery, bakery, brewing, carpentry and building.

In 1854 Olney suffered a fire that is believed to have started on the western side of the High Street. It was reported in ‘The Illustrated London News’ as a “destructive and calamitous conflagration”. The report continued:

“From house to house the burning masses continued to be borne by the wind, till several dwellings and outbuildings, barns, and two or three farm-yards, were enveloped in flames. The three parish engines, aided by two from Newport Pagnell, and one from Yardley Hastings, all worked by able and willing hands, did their utmost, but could not be ubiquitous; and the fire made its way from ridge to ridge, till some twenty or thirty houses on the eastern side and some ten or twelve opposite, together with a considerable number of buildings in the rear, outbuildings, and a large quantity of hay, beans &c., were destroyed, or rendered useless; one-sixth of the whole number of houses in the town being burnt down or seriously damaged”.

The Olney Lace Circle has over 30 members and 6 junior members. The society’s logo is a frying pan with a lace bobbin for a handle. The group provides this history of lace making in Olney.

“It was the Flemish Protestants who brought lace making to England during the 1560’s. Many of these immigrants were lace makers and as they moved out of the overcrowded ports they began to settle into areas now regarded as the historic centres for the craft of lace making. In the county of Buckinghamshire these immigrants settled in Newport Pagnell, Buckingham and of course Olney.

The immigrant lace makers settled in the many courts or alleyways off the High Street in Olney. These were the poorest quarters of town at that time. During the following decade the Huguenots fled France and a great many French lace makers also settled in this area. 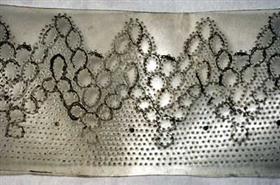 Life was difficult for the 17th and 18th Century lace maker and so it seems surprising that the sole industry of hundreds of villages in this area was making lace. Nevertheless, the lace industry grew as the immigrant lace makers taught the locals how to make lace. To support the lace trade, the local trades people such as the butchers and bakers began to supply the lace makers with materials to work with. Most expensive was the imported cotton and linen thread.

But most materials could be found locally: the pillow stuffed with straw, the pins, the ‘horse’ or pillow stand made of wood and the bone and wooden bobbins. These suppliers would then buy back the finished lace from the lace maker and sell it for good profits in London. Many such dealers became so rich in the 18th Century that they refaced their houses rather grandly with stone.

Lace makers themselves however, were known to work in horrendous conditions. John Newton, during his 15 year ministry in Olney was well aware of the plight of the Olney lace maker. His friend William Cowper was also sympathetic and was known as the ‘lace maker’s poet’. In 1780 he wrote: ‘I am an eyewitness of their poverty and do know that hundreds of this little town are upon the point of starving and that the most unremitting industry is but barely sufficient to keep them from it. There are nearly one thousand and two hundred lace makers in this beggarly town’.

The Old Penny House was a school for young girls run by Sarah Duxbury. You can still see it in the High Street. She taught the girls reading and writing, as well as lace making.

Life was difficult for these young girls. There would be no heating in the house apart from the fire pots or ‘dick pots’ the girls put underneath their skirts. These were usually made of earthenware and contained hot wood ashes. Their hair was tied back in order to reveal their necks so that they could be slapped if the work was not satisfactory. Their heads were also pushed down so that their noses were pressed against the pins.

Next door to the Old Penny House was The Honey House. The family there kept bees. They made a drink called megthelin which was made of honey. On St Andrew’s Day each year the family were allowed to serve the drink to the lace makers to celebrate the day. They ate saffron buns and the children played games. 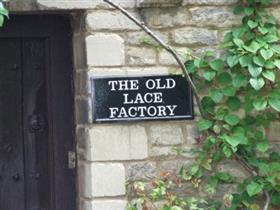 At the beginning of the 19th Century, when machine made lace was coming into its own, new ways of attracting people to buy handmade lace were being thought of. Two lace designers in Olney, John Millward and William Soul did much to keep the craft alive. Lace crowns for muslin caps were designed as these were small and relatively quick to make. This helped the lace maker to survive yet another recession. In the wake of the Industrial Revolution however, the numbers of skilled lace makers dropped and by the end of the 19th Century lace making in Olney was a cottage industry.

Harry Armstrong, a lace dealer, occupied a building in the High Street known as The Lace Factory during the early 1900’s. Lace was never made here although lace ‘joiners’ would have pieced together the lengths of lace that were measured and sorted.”

In 1872 the opening of the Northampton to Bedford railway line allowed people to seek better pay in the industries in those towns. With greater industrialisation, shoe factories were built in the town and replaced the small cottage workshops. A shoe industry of sorts continued after Word War I until the 1960’s. Olney is now a vibrant market town, with many people commuting to nearby towns for work. It’s famous for the yearly pancake race which started here hundreds of years ago. Many local people know it as a place with a strong sense of community and as a safe and prosperous town to live.

If proof were needed that Olney is an historic town – its buildings tell the story. They take you on a journey through the Centuries. From the coaching inns and 18th Century house of William Cowper, to the Victorian Town houses on the High Street the architecture will hopefully delight. Tours from the museum can guide you. 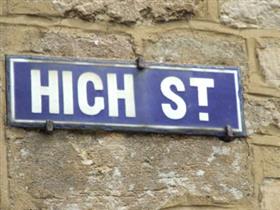 The Cherry Fayre is Olney’s traditional ‘Country Fair’ with country dancing, side-shows, produce stalls, teas, a barbecue and bouncy castle as well as a dog show, demonstrations and the Men’s Pancake Race. The name ‘Cherry Fair’ is reminiscent of the days when Olney produced a large commercial cherry crop each year. What was left over at the end of the harvest was sold off each year at the Cherry Fair.

As the event fell so close to the Parish Church Patronal Festival for St Peter and St Paul, the town took a holiday and the travelling fair would come (as it still does).

On the same weekend (usually the last in June), the Olney duck and raft races are held. Each  duck is numbered and sponsored and raises about a thousand pounds for the local scout group.

Divers help if the ducks are becalmed – and clear them up afterwards. The keenly contested raft race sees local groups build their own vessel and paddle it from the bridge near St.Peter and St.Paul church to the ‘steps’ by the Olney playing fields Stalls, ice creams and a band are laid off at the finish and many people gather at the steps to welcome in the crews.

Olney and District Historical Society provides a fantastic resource for those wanting to find out more, inlcuding an online historical tour in pictures, articles and first person accounts about Olney. Link at www.mkheritage.co.uk/odhs/index.html

For more information, please the entry for the Olney Lace Circle and  www.olneylacecircle.co.uk/lacemaking

With thanks to the Cowper & Newton Museum for their photos of lace – the originals are on show at the museum, together with a history of lace making

The Olney and District Historical Society was founded in 1997 by a group of like-minded people determined to keep the history of the town and its environs alive for all generations of people living in the town of Olney. A series of meetings and outings/events are planned each year, the meetings are held in the Olney Centre, itself of much historical interest. Life in Olney has changed beyond all recognition during the last seventy years or so, and one aim of the Society is to document the reminiscences of inhabitants before their memories are lost forever. The documented records take the form of published books and articles.